As much as I wanted to thru-hike a proper southbound hike, it just wasn’t possible for me to start at Hart’s Pass (the last trailhead which is accessible by road in the US) for a loop to the Canadian border. Since it is illegal for everybody to enter the US from Canada hiking the PCT, all southbounders must start at Hart’s Pass, adding 30 miles to the already daunting total of 2660 miles. By the time of this writing, there is still too much snow to hike safely. The trail is totally invisible, the snowfall and fog makes it harder to navigate, the snow literally slows you down. The weather is unstable and only a handful of people have attempted to make it to the border and back.

One thru-hiker slipped from a steep slope last week, fell down and was lucky enough to be saved by a tree that stopped his fall. He was rescued by helicopter later that day. With 4 broken ribs and a severe head wound.

He must have had an angel on his shoulder.

I had been in touch with Edward Intvan for a while, a Dutch trail angel who lives near the PCT in Washington state. He has helped me enormously by getting started. He picked me up from the train station and drove me to the grocery stores, gave me many golden tips and introduced me to several other trail angels, people who have a passion for the trail and it’s hikers and who will go the extra mile to help you with whatever you need.  So he took me to the Dinsmore’s in Skykomish where we stayed 2 nights and where I could prepare my food boxes which I then could send myself to towns on the trails which are too small to have an actual store where you can buy your resupply. 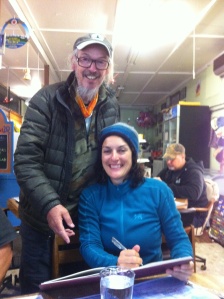 With Edward in The Baring Store, Skykomish, having fun writing in the restaurant’s register.

In Ed’s van in the grocery’s parking lot, preparing 26 breakfasts, 26 lunches, 26 dinners and dividing them into boxes.

And then back at the Dinsmore’s where Steve is teaching me an excellent snow class, on concrete…